This is a before and after picture of someone’s eyes. But how did they change color? Ah you see, the eyes are not only a window to your soul, they are also a window to your internal health!

A few days ago I had the wonderful pleasure of meeting Steve Factor, The Pure Energy Chef from Burbank, CA. 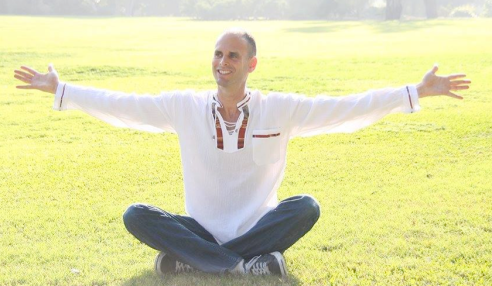 Steve is a huge contribution to the raw vegan movement and a magnificent soul! He’s been awarded ‘Raw Coach of the Year’. He’s about to open up a juice bar in Burbank. He teaches raw vegan workshops at Whole Foods and has many videos on YouTube where you can hear him speak about all the benefits of living foods and the amazing PURE ENERGY they can provide for us. During our talk, we chatted about RAWKIN’ foods, as he likes to call them, and detoxing, which brought up Robert Morse, N.D.— one of my greatest heroes! Steve will be visiting Dr. Morse in Florida soon to work with him on a collaborative project.

Dr. Morse is one of the greatest healers of our time.
Through his practice, books, and online videos, he spreads awareness to the public about the most important aspect of true health that there is on the planet: DETOXIFICATION. He has an 85% healing rate of success and has treated over 250,000 patients. His belief is that the allopathic approach (pharmaceutical, surgical, radiation) to treating disease cannot offer any “cures” to diseases because they may only remove the symptoms and never take care of the root cause. He is a strong proponent of natural (traditional) medicine, which uses products made from natural sources or herbs to treat disease and regenerate the body. In general, the diagnostic procedures used in natural medicine, including iridology (which I will demonstrate in this article), kinsesiology, pulsing, hair or tissue analysis, and many others are non-ivasive and not harmful to the patient whatsoever, coupled with a raw vegan diet (high in alkalinity), can aid in the process of removing all the obstructions that halt the body’s miraculous self-healing mechanisms. He believes that there is no such thing as disease, only an alkaline or acidic condition of the body.

Iridology
The reason I’m bringing this up is because I am very intrigued by one of Dr. Morse’s videos online that touched upon the subject of iridology. Iridology relates various spots on the eye to about 50 parts of the body. The innermost blue circle in both eyes, for example, is said to reflect the health of the stomach. The topmost quadrants are said to represent the brain (cerebrum and cerebellum) and other parts of the head. It has been said that the yellowish color around your pupil is sometimes an indication of your body’s toxicity. If this is true, then the more you detox, the less yellow you should have.

Steve’s Eyes
And then here’s Steve, sitting in front of me, pulling out his iPhone to show me the progression of his detox through his iris! He got an iridology exam around the time he started eating 95% or more live vegan foods. Four years later, he gets another iridology exam, and the results are nothing short of amazing! And this is just in 4 years time. I’ve been wanting to try this out myself, as I am so curious to know how my eyes can change too over years of eating clean and detoxing.

And Steve is not the only person whose eyes have changed color. Kristina Carrillo-Bucaram, aka Fully Raw Kristina has a video where she talks about how her eyes changed from brown to greenish blue after years of eating a fully raw vegan diet.

So what does this tell us? A whole lot! Aside from demonstrating that raw vegansim is not just some fad diet, I’m excited to share this because there’s a great deal of skepticism going on about iridology and many other holistic practices. Well, I don’t believe it’s a ‘coincidence’ that people’s eye colors are changing after a dramatic change in diet and lifestyle. And this is a truly amazing way to prove that living, clean foods and detoxification can completely transform someone from the inside out. Time and time again I am shown that our bodies are incredible machines, and every speck on it has a purpose and connection to something else, just like every person living on this organism we call Planet Earth. 🙂

Cheers to your body and to your health!

—
*UPDATE: After posting this article, someone asked me “So a fat man with blue eyes is healthy?” – although funny, this is a very good question. My response was that unfortunately for the blue-eyed overweight man, no, it does not mean he’s healthy. It’s not just about the color, but also the way the fibers are shaped. You can see Dr. Morse’s outlines in black around some of the fibers on Steve Factor’s eye picture indicating something in that area (corresponding to a specific part of the body). The color yellow indicates sulfuric acid in the body, and how much this yellow appears in the iris can help determine the level of acidity in the organs and glands. For many people, this yellow color can actually cover the entire eye, making their eyes appear brown or hazel, when they can really be green or blue underneath. It’s easier to understand if you watch one of Dr. Morse’s videos, where he analyzes different photos of his patients’ eyes.